Scandinavian guidelines for management of minor and moderate head trauma in children.

The guideline was published in BMC Medicine 2016 by Åstrand et al.

Authors are members in the Scandinavian Neurotrauma Committee, and on behalf of this group this evidence and consensus based guideline was developed. This is a new approach in the development of guidelines for minor and moderate head trauma in children, as the other world-leading clincial descions rules (CDRs) in this area are derived from a chort of children with head trauma in a specific setting/country, which has strengths but also limitations.

This evidence and consensusbased approach has considerable advantages, as it implement knowledge from multiple other well-validated CDRs. A limitation, as a consequence of the method of development, is that it is not tested in the population it is intended to be used in. This is why a clincal validation and development study (SHIPP-study) has to be performed before full-scale implementation in Scandinvia. 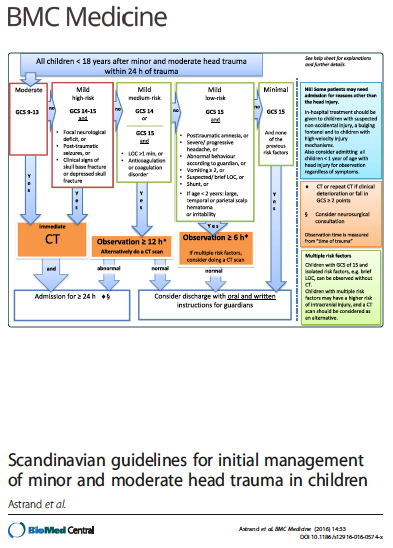